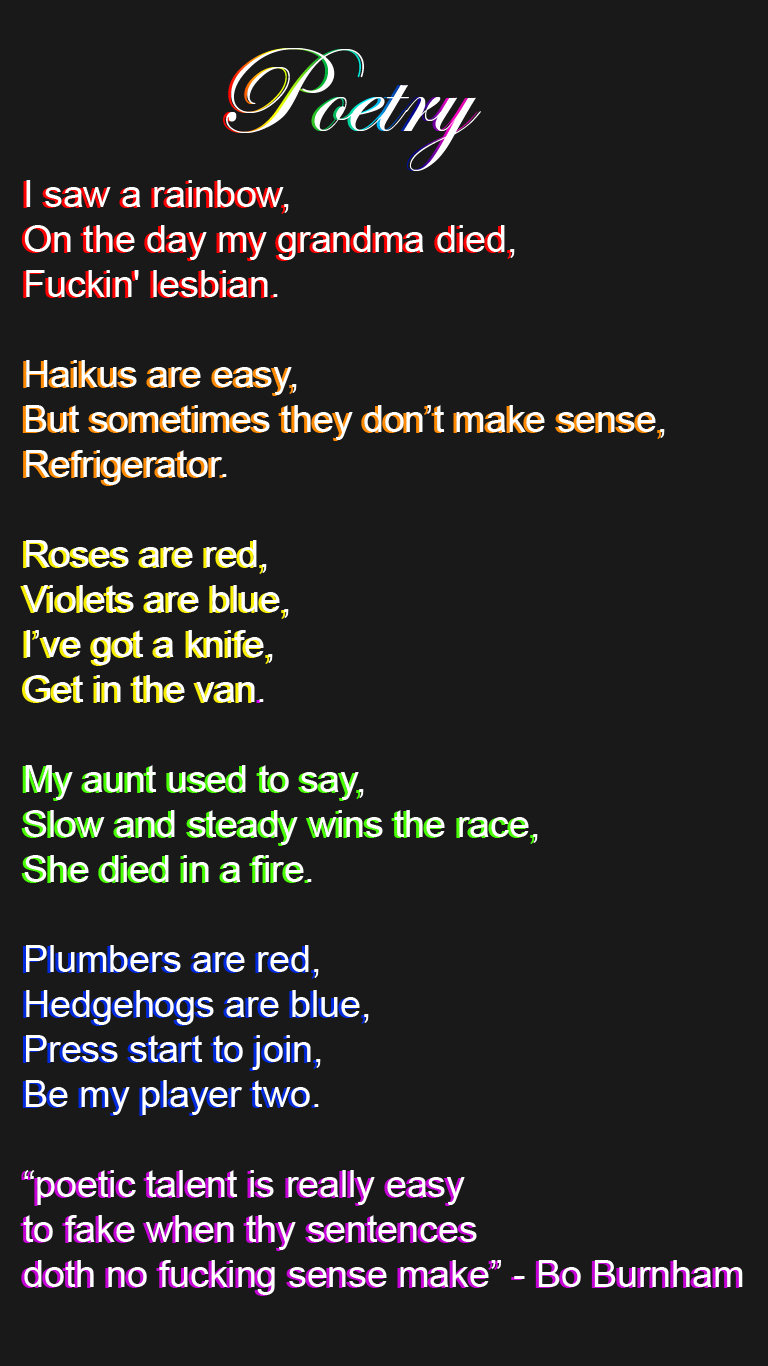 There once was a man from Peru. Who dreamed he was eating his shoe. He woke up at night. With a terrible fright. To find out his dream had come true!

Our school trip was a special occasion. But we never reacher our destination. Instead of the zoo.

I was locked in the loo. An elderly man called Keith. Mislaid his set of false teeth. They'd been laid on a chair. He'd forgot they were there. Sat down, and was bitten beneath.

When I'm old and mankey. I'll never use a hanky. I'll wee on plants. All doggies go to heaven - or so I've been told.

They run and play along the streets of Gold. Why is heaven such a doggie-delight? Why, because there's not a single cat in sight!

That's not my age; it's just not true. My heart is young; the time just flew. I'm staring at this strange old face, And someone else is in my place!

I am a dog. And you are a flower. I lift my leg up. And give you a shower! I eat my peas with honey.

O wasp upon my window sill, How dull thy once dread sting! Thy presence brought foreboding Of the pain that thou couldst bring; And this caused me to cudgel thee, Thou wretched, wretched thing.

I am a protozoa: Behold my polar rings! I luncheon on red blood cells, And do some wicked things.

I am Apicomplexan, A parasitic breed. You know me as malaria, And I am vile indeed. Chickens look peculiar. They feed on worms and seed. They scratch and cluck and peck all day, Or sit there laying eggs.

Chickens are all feathery. They strut about with pride. Although chickens have got wings No one lets them fly.

Chickens in the chicken hut. Chickens in the yard. You can eat most of them, But their beaks are pretty hard. On safari out in Africa, When I was just a child, We shot a monkey every day; It used to drive them wild.

Far and wide we searched for some, But, alas, all were dead. Do worms have their own worm law? Do they squeal, shriek or roar? Are their nests of fluff or straw?

And do they have a bathroom door? Have you seen a real worm nest? Dipped your toe in for a test? Would they welcome such a guest?

Or would they just be unimpressed? When near the worm nest please beware. Where you are treading have a care.

Then, as I was bowled out With the head of a trout, We heard a feint knock at the door. The dogs gave a bark; And we thought it a lark As the door was nowhere to be seen.

So they ran round in squares At the top of the stairs, Chasing a lima bean. We all stood aghast As a crumpet flew past, Unbuttered and not even toasted.

By mid-afternoon, With the aid of a spoon, We had whittled a boat out of cheese. For the rest of the day We played bridge the wrong way, And walked on our hands and knees.

Sneezing is a waste of time. It stops one doing things. It spreads bacteria around And frightens family pets.

It blows paper on the ground And mucus out in jets. And round about a half past two, I sighed and made a kitten spew. And yesterday something I said Made birds nearby me drop down dead.

Every Saturday, around quarter past two, Daddy grabs a shovel and flings cat poo. Out in the garden is where he goes, Hunting out the bits of poo he throws.

Daddy says cats are horrible things; They make the poo that daddy flings. There are things that I love, And some I love most, Like the sound of a glove Or the smell of a ghost, Snowmen on fire, Freedom imposed, And buckets of barnacles Shipped to the coast.

There are things that I love, That give me delight, Like whelks on a carpet, And ponies at night, Poorly fed peacocks That lean to the right, And flies, wasps and bumblebees Having a fight.

Anguished wailing fills the air. Such deep regret Caused by a chair. The leg, For which I gave no care, Met with me in painful flash As toe was stubbed.

Behold, how small a pigeon is; He is but aught to thee. And thou, then fearing for thy life, Into the ground should flee.

Upon these thoughts now spend a while, And know thou shouldst, without regret, Be joyful, yea, and do not mourn For the pigeon thou hast ate.

How did such power proceed from but so small a squeak? And what, I say, hath forced such vile an odour out? It is, my friend, the wretched thing we call the sprout.

The mice eat Amongst the wheat: Small plump rodents Eating grain, With squeaky chuckles At cats in pain.

The mice rest Within their nest: Dreams of cats squashed While on prowls, And happy thoughts Of bludgeoned owls. I once heard an enlightened man Proclaim during a hosepipe ban : That beavers do not make a dam With plastic forks or a leg of lamb.

Then he prayed upon his knees For beavers flattened by tall trees. Giblets, giblets, The name I love to hear. Its basic form of eloquence Can make dead weasels fear.

Giblets, giblets, When said out in the road, It can deflate a porcupine Or make a cat explode. Giblets, giblets, If shouted upside down, Its tone can boil tortoises And cause a mouse to drown.

You paid for this by cheque sir; A very ample portion. Cactuses, flatulence, sprouts and lost car keys, Carrot juice, turnips and faces of turkeys, Tearing my favourite coat on railings: These are a few of my most hated things.

Traffic jams, cat sick, and losing a ticket, Spilling the whisky all over the carpet, Power cuts, headaches and having fillings: These are a few of my most hated things.

When information we receive, Of something we wish to believe, Knowing that we could be deceived, We fools become.

We choose the things that suit us best, And do not put them to the test; But hurriedly discard the rest, Without a care. And to our deaths we shall defend Our baseless hopes to bitter end; The facts and evidence to bend, To prove us right.

I went outside the other day, I went to walk around; And there I saw a porcupine Flying underground. Some time last week, It could have been Tuesday, I heard a loud squeak, Then a pig stole my muesli.

But what happened next Left me quite shaken, For I heard a pop, And a pig stole my bacon. It left me perplexed And rather disgruntled, But I laughed at the thought That it might be his uncle.

I saw the cows a-flying Late one night in June. On the rooves below they dropped their dung, By the light of the silvery moon. The sight it was tremendous, The smell was rather vile, For putrid heaps of bovine filth Adhered to every tile.

As quickly as it all began, The creatures fled away To barns throughout the countryside Where they reside today.

Snakes will never feel the pain Of an arthritic knee. 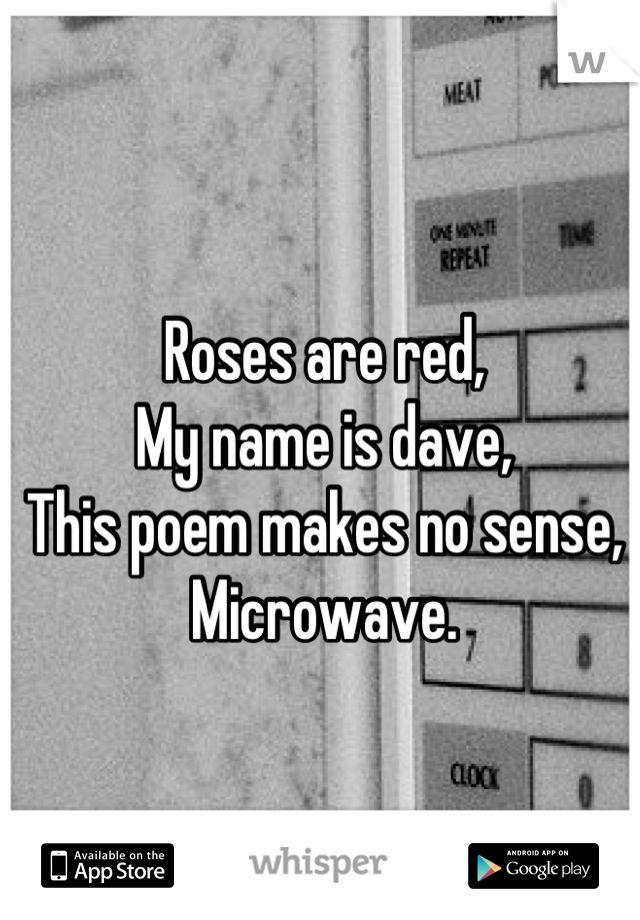 Funny Poems That Make No Sense Stöbern in Kategorien 0 Replies to “Funny poems that make no sense”